As a teacher that takes their summers off to rejuvenate, I often find that getting to rejuvenation sometimes take some magic to get started.

To me, rejuvenation means clearing my head of all things education.  I need to purge my negative and positive stress from the school year.  I need to cleanse myself of all things school. I wish I could say that this was easy for me, but having a heavily involved and invested teacher as a wife, and since my wife and I devote 24 hours a day to our students and school during the school year, it is a struggle to stop my teacher mind and find my own personal peace.

I celebrate this week, the official coming of my personal peace.  I was able to sit in my back yard with complete silence with the exception the oversized poplar trees blowing in the cool wind which makes the sound of bacon frying (I'm a vegetarian, but I remember this sound).

This peace allowed me to reconnect with myself.  This magic time for me was like one of those Magic Erasers that my wife uses to clean every stain on the planet.  It erased the stress, the obsessive thinking and planning, the negatives and the positives.  I was allowed to simply be.  That is how I rejuvenate. I simply see and exist with an appreciation for the moment, in the moment.

I am reminded of a psychological therapeutic method of Mindfulness that comes directly from Zen Buddhism.  I meditated within the moment recognizing only what is in front of me.  What I see, what I hear, what I smell, what I feel.

I have noticed since, the school stuff and real life comes up all too often, but I am finding it more and more easy to become mindful as the days pass.

This is my rejuvenation. I am here and will appreciate it. 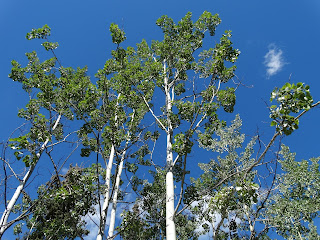 Posted by LevineLiteracy at 11:44 AM 6 comments:

At a Parent-Teacher conference last year, I was meeting with a parent.  He is a great father and I was lucky enough to have all three of his daughters in my classes through the years.  We were talking about how different each girl was as a learner, as a person, and as an artist.  He went on to explain to me that he feels that the reason that all of his girls are successful in their own person way is that he let them and their personality guide their needs for parenting.

Again, all are successful  They are mature, but no stressed.  They get good grades, but not all of them make grades priority.  They are respectful and hard working.

After this meeting, I realized that this holds true for my teaching.  When I first started teaching, I was told to "throw a dart at the middle and that is where I should teach" by a veteran teacher that I respected.  That is to say, teach to the middle and hope the struggling students will eventually get it and the higher students will simply find ways to challenge themselves.

Next, I was re-introduced to the wonderful world of differentiation.  We all read the bible of this idea and there have been 100s of books published about differentiation since.  I started to equate this to throwing THREE darts instead of ONE!  I would throw one in the middle, one towards the top with some type of enhanced learning, and one towards the bottom that would be easier and less challenging for those that struggled.  Differentiation was the answer, or so I thought.

I was never satisfied with the 3-dart fix in differentiation.  I wanted to throw 25 darts at my 25 students.  Figuratively, not literally, although sometimes maybe...

I found that each student is a human being with their own needs, experiences, challenges, home-life, aspirations, etc. and none of them fit into a box.  I needed to find a way to personalize learning to each student!

I know this sounds a lot more difficult than differentiation, but it really isn't.  Personalizing learning has to start with knowing your students and trusting them.  By knowing them, you get to systematically get to know what they are needing and looking for in the educational journey.  By trusting your students, you allow them the freedom to take risks and take responsibilities!

I have found by having REAL and authentic conversations with my students, I am meeting their needs much better and on a much more realistic and wholistic basis.

Something to think about.
Posted by LevineLiteracy at 4:39 PM No comments:

Emma was that 7th grade student that came into my class with a chip on her shoulder.  The twisted face and body posture was that of anger and repulsion.  She answered questions in short, one word bites. Emma seemed to thrive on her hatred of the world.  She was looking for a fight with someone or something and this made me uncomfortable on a couple of fronts.  First, I really wasn't looking forward to a fight in or around my class.  Second, I have encountered students like this before on many levels and they are not easy learners.  In fact, they tend to be the type of learner that power struggle with teachers to get out of work and make excuses for their lack of learning.

I liked Emma.  There was an obvious soft side to her and I knew there was a story behind her anger and hardened front that she portrayed.  To help her to be a success, and for me to be a success, I needed to break through the exterior to truly be her teacher. I knew it might mean that she would push me away at times, but I would be patient and wait for the right time to reach her readiness to learn.

Instead of meeting her with a power struggle of my own, I would play with her anger a bit and when I saw my opportunity, I would sneak some teaching and learning in.

Next, I started imitating her facial expressions without saying anything.  Emma didn't like this at first, but eventually, she would look at me and say, "stop!"  What I noticed is that when she would tell me to stop, Emma would always have a smile on her face as if she was caught and I was seeing through her mood.  It was at this point that I felt the door had opened for me to sit down and actually have a REAL conversation with Emma.

I sat down with her and asked if she was okay.  Emma seemed confused as to what I was talking about.  I reminded her about her facial expressions and body language.  Emma looked down and said that I was the first teacher to ever notice her.  I reminded her that she argues with all of her teachers so I was positive that her other teachers noticed her.  She went on to explain that she didn't feel important enough for anyone to take the time to care about her at school and at home.  Her entire life, according to Emma, had been about conflict.  As Emma explained her life at that moment, it was clear that she didn't know what to do with someone that noticed her and wanted her to be a success.

I then knew what I needed to do to move forward.  I needed to show Emma that she could be a success in small bites.  I found that little successes were easier for her to attain and much easier for her to handle as authentic.  I would recognize something that she did well each day and bring her attention to it.  I would write notes of encouragement on her assessments focusing on what she did correctly much more so that what she had incorrect. We worked like this from October until the end of the school year in May. She had gone from silent looks off arrows through my heart to small smiles and quiet conversations between classes.  Her grades went from straight Ds to straight Bs by the end of May.  On the last day of school, I even got a high five from Emma.

Unfortunately, the generalization of this intervention was minimal as Emma continued to get into arguments with other teachers, staff, and students.  She continued to get involved in Middle School Drama with other girls which caused her many consequences.  I had hoped that there might be some transfer to other areas of her school world, but at least she had one part of her day that she could look forward to and relax her tension.

As Emma starts 8th grade next school year, I am hopeful that she will mature using some of the positivity that we realized together and can ultimately transfer this to her new teachers.

Connection is so important to our students.  A student's mood has to be in a good place in order for them to think or to learn.  We cannot simply yell at a students and force them to learn.  Thought requires emotional space.  It is often our job to help the students to clear out the garbage so their is room for what we have to teach.
Posted by LevineLiteracy at 9:46 AM 4 comments: